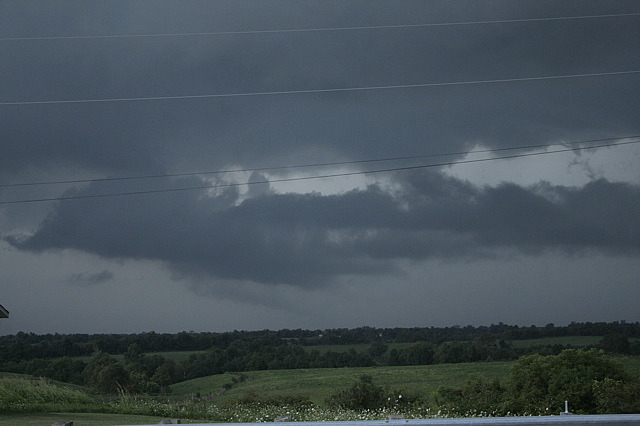 This is what we found our family driving into on our way to Ohio a few weeks ago. The sky looked so angry and I wished we were pulling up to the in-laws house sooner rather than later. Usually, when the the skies are raging I want to get away – get inside and get out of the way – oftentimes plans are forfeited due to storms.

I have been thinking a lot about storms in terms of internal storms – the storms that rage inside and are often termed as fear, anxiety, depression, and so on. We have all heard the old folk tales that thunder and lightning mean God is angry and rain signals God’s tears. I don’t believe it’s altogether true but I do believe it can seem that way. When trials hit us from every direction we often think God has his fist raised at us. At least that’s how it feels.

Recently, Saint Lewis – my husband and I’s band – led a worship night out of town, bringing our usual band whom we often gig with, when available. One other band-wife had come up as well, so I went over to talk to her afterward. Soon, the rest of the guys had joined and we were all catching up on life.

Through questions and casual conversation I learned that some of us had been fighting physical/medical storm for months – had even played out with the rest of us a few times – and we had no idea. Consequently we probably hadn’t talked much about our personal lives. We were always busy with rehearsal and music related things.

We shared our related struggles and possible solutions, then gathered around and prayed as a group. We offered support, encouragement and thankfulness for letting us know. Once on the road, Shannon and I talked about how strengthening it is to share others trials and battles.

This thought was also sparked by my friend Mandy’s recent blog – she simply invited people to anonymously comment about anything, but what erupted were countless comments that showing deep pain, fear, and the feeling that it all had to be covered up. The confessions were numbing.

On the other hand, Shannon recently received a text message from a dear friend who stated, “I am reaching out to some guys to help support and hold me up during this time.” He expressed the depth of the situation and asked for help. I had recently spoken to his wife who expressed the need for people to walk with them through this journey. We knew of their burdens but didn’t know the details. We were so encouraged to be invited into their life in that way. We brainstormed ways we could help and made a decision to spend some quality time with them on a regular basis. This is community. This is living life together.

We are not meant to face storms alone. We are not meant to live in the shadows. Fear and anxiety can wreak havoc on our effectiveness in life, even more so if we stay closed up and secretive about them. Fear, anxiety, worthlessness, feelings of rejection – all serious things that can lead to greater problems if we don’t process them. People don’t often know what is going on with us unless we reach out. We are so good at putting on the mask and acting like it’s all fine and dandy.

Confession is good. I love how my friend responded to the heart wrenching confessions on her blog- here.

As we reach out with an invitation to open up, We are releasing real power to people who are living in the shadows. We were not meant to do this alone. I am further challenged to remain mask-less and be real with people. After all, that’s what I seek in relationships: transparency & authenticity. Let’s be true and honest – for that is when true healing comes.

Breath Retreat - Martha Bowmen UMC
Last year shortly after our home was burglarized and other stressors began to surface I became overwhelmed and physically felt the effects of not taking care of myself.

Thanksgiving explained
This past Thaksgiving was unlike most from the past.

Not Guilty Anymore
We have met and connected with some marvelous people this year.