“Out of the mouth of babies and infants you have established strength…” – Psalm 8:2a

It was a normal Tuesday afternoon last January.  My two year old was sleeping and the 4 year old was doing an art project. I was on the phone sitting in our family room generally facing the direction of our back yard. Sunlight was streaming in through the bay window filtered by the glistening leaves on the towering oak in our back yard. Sometime during the conversation – for no specific reason – I turned around to look out the window.

What I saw still baffles my mind.

A boy from – I assume – a neighboring neighborhood – somewhere between the ages of 8 and 10 – appeared to be tiptoeing in my backyard. He was walking towards our back patio, locked eyes with my own, and suddenly looked as though he had seen a ghost. The boy let out a shriek,, did an immediate 360 and sprinted off –  leaping entirely over our fairly high stone wall. I let out a laugh thinking to myself  “that was odd” then an uneasy feeling set in. I asked Kenimer if he had known the boy he said “no”. I walked outside onto the patio and saw what the boy found enticing which had been just out of his reach when our eyes had met: Kenimer’s shiny new red bicycle that he had received for Christmas.

Then it hit me: that boy was trespassing in my back yard attempting to steal my son’s bike!

Anger overcame this mama hen, especially in light of the major burglary of our home just one year earlier. I became livid – this was a boy a kid!  “Who is teaching these kids to walk in yards and steal anyway?”, I thought.

I brought the bike inside and called my husband to process is all.  Kenimer heard the whole conversation. I expected that he would share my anger. After all, it was his beloved bike that was almost stolen.

However, Kenimer’s behavior was a bit strange. He was very quietly sitting at the bay window. While I was complaining about the decline of the American family and the fate of children who steal my four year old came over to me put his hand over my mouth and said “SHHHH. Mama – don’t be mad.  It’s OK. I want to give that boy my bike.” “What?!” I thought. He looked at me with deep conviction and said “I want to ride real fast find that boy and give him my bike. That will make God happy and I think that is a nice thing to do. That boy does not have a bike. I think I don’t want my bike any more.”

Please know that I did not prompt any of this. I was in particular disagreement over his undeserved generosity towards this boy, finding myself more than a little embarrassed that my son was displaying such amazing compassion and I his mother was so angry.

Over the next hour he asked non-stop to be taken to find the boy and give him his bike.

Another familiar voice was ringing through my mind “Do you not think that I can speak to a four year old?” This was a spiritual conviction – the burden of God on Kenimer’s heart – something he believed that God wanted him to be willing to do.

So I decided to die to my anger – my desire to get even had to wilt away.  We prayed for that young boy: that he would stop stealing and that he would get a new bike just like Kenimer’s then took off to the nearby park to look for him.  We never saw the boy, but we were totally prepared to give this young boy a bike.

Returning home, I attempted to lock Kenimer’s bike in the shed but he protested “I want to leave my bike out for the boy!”  So we had a little devotional time about generosity and compassion but also stealing and how it’s best not to tempt someone to sin – wanting to give the boy the bike was great but we didn’t want to enable the boy to steal, which Kenimer seemed to understand.

I want that kind of compassion: to see a person and their situation or pain – to see their need, not just what they have done or how they are acting.

“And if anyone would sue you and take your tunic let him have your cloak as well.” – Matthew 5:40

A lesson learned from my four year old son. 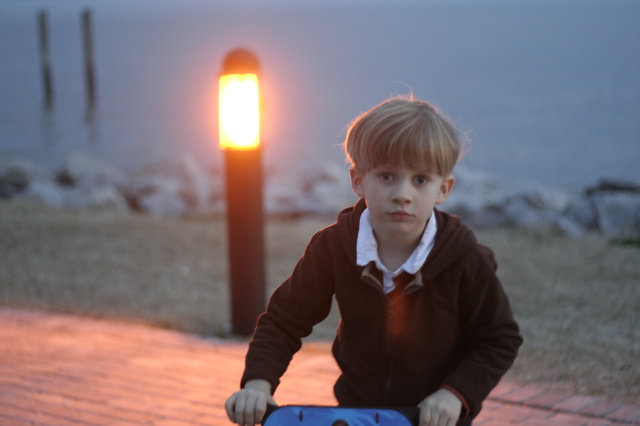 This blog is my participation in a “She Speaks” scholarship give-away by Ann Boskamp.  The She Speaks conference is all about women connecting the hearts of other women to the heart of God.  Please click the link above to find out more.

My Precious Husband - My Valentine
.

A new journey. Celebrate your life
As tradition continues my husband and I drew a word right before our family Thanksgiving.

Art and Hospitals
Who:  Alyson Tucker (My Mom) - the featured artist Where:  outpatient center of the Southeast Georgia Regional Hospital What: A video collage to commemorate the artist and interview an admirer How: Click the video & watch it till the end to see the paintings scroll through.