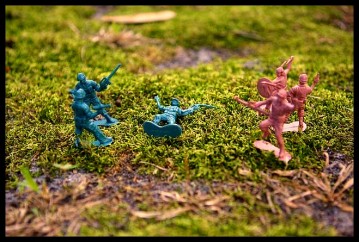 Have you ever felt like you were participating in a verbal war – a full-scale military conflict, of sorts? An effort to get your story heard and defend your actions can sometime feel more like standing in the line of fire than a civil attempt to resolve conflict.  Even apart from conflict, I am often driven to tell my story when in conversation – it could be any one of my many stories that may somehow relates to yours.

This musing is partly due to reading an unforgettable post by Randy Elrod about the art of charisma. The key consideration was the ability to be present to people.

An excerpt from his post:  Here are three ways to practice Charisma.

A.) Pay attention to your Emotional State: Charisma is, in part, the result of controlling which emotional state you go into. Practice being geuinely optimistic and genuinely curious.

B.) Focus: the only way you can be charismatic is by paying attention to other people. When you are with other people, what are you focusing on? Are you thinking of what you will say to them? If so, you’re blocking your charisma. Don’t focus inward, rather pay attention to the person in front of you.

The conversations nestled within the comments section spawned an impelling desire to remodel my conversation habits, motivated by a heart to truly listen.

I will inprove in this area. I want to become an authentic listener.  I want to lessen the need to explain, battle my drive to throw around details like confetti.

That inspiring morning then unfolded into a day bearing disappointment: a phone call bearing sad news – the cancellation of an event over which my husband and I were initially very excited. Yet, the day goes on.  The evening held a worship leading time at a local camp. My husband had been asked by the camp leaders to bring me along for the last night.

I was excited. We loaded into the car to head over the causeway, but the discouragement from earlier in the day seemed to climb in with us, an uninvited passenger.

I could smell it. The all too familiar scent of this monster. I knew I had to to fight.  I voiced my understanding and validation to my husband, he voiced his frustrations. I opened the Bible to read encouragemnt to him as we were driving, That very moment his phone started beeping, several texts and it became apparent that a good friend was quite irritated with us.

The issue: A few weeks ago after a worship service I was packing up my keyboard set-up and a willing individual offered assistance. During the pack-up something that did not belong to me was put in my keys case in a hard-to-find zippered compartment.  Call it an accident or a crazy mishap, nonentheless we had something in our possession that belonged to someone else. An inability to find it and return it resulted in inconvenience for others.

In my case I wanted nothing more than to get my story across. I wanted to defend my case.

“I did not knowingly take anything”

“I am not irresponsible”

I was defensive – determined to be heard.

Then I saw the sun setting over the ocean as we crossed the tranquil bridge. It was as if the sky lit up and said “What are you doing?”

When I realized what I was falling for, I quickly got off the defense train and stated that I was sorry, I would return the missing item as soom as possible and owned my part of the problem.

The problem was that in my previous defensive tone I think it was hard to accomplish sincerity in my apology. And I repeated myself because – once again – I wanted to be heard.

I realize that the number one issue in conflict is that we do not often feel we are heard. Maybe if I was able to listen without having my story pour out like untamed lava, then I could truly hear. I want to become a better listener, to my friends and family and namely, my Father God.

I want to drop the arms bearing my story and my excuses, and really listen. Thoughts? please share………

Chasing the Dragon by: Jackie Pullinger
The saga continues.

He was scared that I was dead.
Following the labor and birth of my two boys, this is the scariest event of my life.