I bought my home seven years ago, drenched in 1940’s charm and laden with 56 years of  history, deterioration and antiquity. It came complete with one central bathroom – perhaps it was the black and white tile that lured me in – definitely love at first sight. The practical voice was silenced as naivete rose to the table… 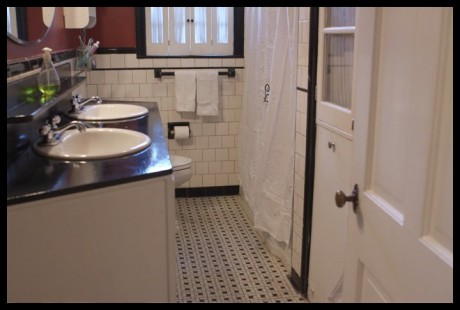 …after all, we weren’t planning to have a family in this house, it was our starter home…

…after all, I was utterly wrong on both of the previous statements.

Parenthood snuck up on us five months after marriage.

One bathroom + one pregnant wife = need another bathroom.

I began to walk around my small home brainstorming where the second bathroom could go. We had a large covered back porch with a tiny room attached – that tiny room held our lawn equipment, I began to poke around in there when I noticed an old rusty plumbing hook up. There were bolts in the cement where a small divide had been hung – it was rustic.  Though we both declared there once was a bathroom out there, one could hardly call it a bathroom – it was very small and WHY outside, away from the house? I had no explanation.

Until… I read the Help. 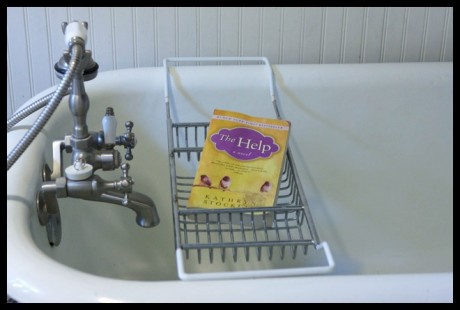 The help is a historical fiction novel which arouses many real-life memories for those who lived during it’s era. For example, my father reminisced of playing in his grandmother’s basement and noticing an old commode in a corner with a piece of plywood nailed around it. When he asked why it was there, his grandmother said “That’s the bathroom for the help.”

As we enclosed the back porch and began converting the small room back into a bathroom it was confirmed by the plumbers that there once was a commode and sink in that spot. While I lack official confirmation, the countless stories I’ve been told by my elders enforces the belief that it was common to have a commode out in your garage or shed encased by only plywood for ‘the help’. Today I visited a large home down the street that was being shown as an open house, the realtor showed me the ” the help’s quarters, a small room with attached bathroom off the back of the home. Below is a pic of the little corner that I believe was the help bathroom, this room was cinder block and it appeared that wood was bolted to the cement right beside the toilet as the indentations can still be seen in the painted floor. 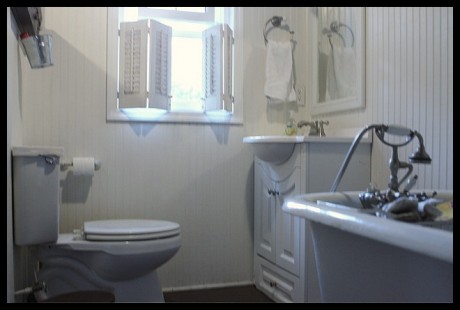 Though it is humorous that the book has shed light on a plumbing quandry in my home, the book shed more light on the simple act of courage. The book is masterfully layered with varying perspectives – several maids and the women they work for – the maids employ great bravery as they share their tales of years worth of working as ‘the help’. Their actions could cost them their lives and least of all their jobs. The price to speak up was high but in the end Aibileen and Minnie – my two favorite characters – knew what they had done would bring awareness of the racial discrimination and elicit change.

This phrase in the book describes a simple truth about our differences: “We are just two people. Not that much separates us. Not nearly as much as I’d thought”

I enjoyed every minute of the book so I couldn’t wait to see the movie.  Sadly, I think it would  have impacted me more if I had not read the book first, as I was in constant comparison mode…

“Oh they added that,”

” I wonder why they left that out”.

The girl who sat next to me had not read the book and knew little of the story: she cried and cried – overwhelmed with emotion. I secretly wished I was seeing the story with those fresh eyes – that newness.

Then again the book was an emotional and moving read for me, and I would not have turned away the opportunity to read it!

What did you think?

Penske and send outs!
A few weeks ago we had a rare occurance in these here parts.