It’s funny that as I get older I seem  to tackle things I always said I couldn’t do. The more I chip away at the  “I’ve always wanted to do that list”, the more I learn that my inability is simply resistance to fulfill my desires. The resistance is experienced as fear: fear of the unknown – fear of failure.

Several months ago I gave some presentations at MOPS about creative ideas for home, gifts, and kids. A mom approached me and said “You’ve inspired me and I went out and bought a sewing machine to learn to sew“. I was excited about her new endeavor yet I felt ashamed at the mention of sewing. I had inspired someone to start sewing yet I couldn’t even sew myself. You See: I HAVE ALWAYS WANTED TO SEW – I HAVE TRIED SEVERAL TIMES AND FAILED MISERABLY.

The basic operation of the machine seemed to get the best of me.  Several times, I attempted sewing on my sisters machine and the bobbin would get stuck, or I’d break a needle, or push the peddle too fast, or lose control leaving my stitch looking like a chevron pattern party.

I look back and see one problem: I was attempting to sew alone. I never really sought the instruction I needed to successfully operate a sewing machine. I was mad that it didn’t come easily, and so I quit.  In fact I attempted to sew on several occasions with the prediction that I would fail miserably. and. I. did. I had a sister that sewed wonderfully and a skilled seamstress for a mother in law, so pawning sewing projects off on them became the crutch to uphold my belief: I CANNOT SEW.

Fast forward to several years later and Brunswick gets a Joannes. The desire to sew resurfaced and a group of friends decided to start a sewing group called Gathered Together. The skill of the sewing in our group ranges from beginner to professional.

The group decided to meet once a week for several hours in the evening and sew a project together for support, help and fellowship. Each week someone posts a simple project so you can prepare by buying supplies and cutting the pattern. I was ecstatic and arrived completely prepared, ready to sew. Guess what? My second-hand sewing machine died a painful death.  Several pro friends tried to revive her but there was no luck. Nonetheless, I still managed to finish my project for the first week – with eight sewing machines there was always one available. 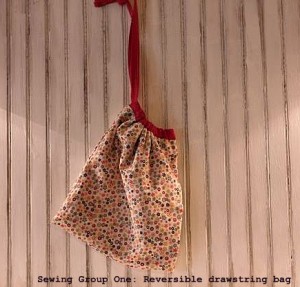 I cannot tell you how encouraged and equipped I felt while sewing, I think it was simply the support of the women around me, all being at different levels and all helping one another. I could not get home fast enough to show my hubby what I made, entirely by myself!  He was impressed and even asked “Are you sure you no one else sewed on this?”  He remembers the chevron stitch, also know as crooked sewing. 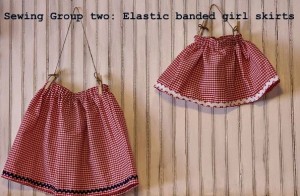 Second week came and I was ready to tackle the next project. That week a girlfriend came and didn’t feel like sewing, so she let me use her machine and even ripped out a seam for me when I messed up.  Once again I drove home so excited and giddy over my new skill.

Third week was rather stressful: stress on the homefront, stress in the money world, and stress in sinus land. I nearly let it get the best of me and in my moodiness almost decided not to go – besides this week’s project seemed hard and I was a bit worried I might fail.

The presence of the fear/resistance is what made me decide to go. I knew I needed it – the degree of resistance/fear I feel about doing something is usually proportionate to how badly I need to do the particular task, for the growth of my soul.

I went to sewing group and tackled my fear.  One girl was out of town so she dropped her sewing machine off where the group was held that night so I could use it. How thoughtful is that?! I tell you this sewing group is therapeutic. 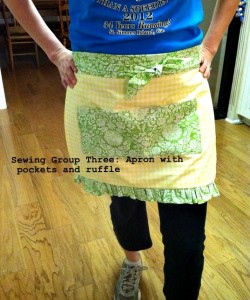 On the way home from the third sewing group it hit me: the reason I was able to sew reasonably well this time was simply the support I had around me – the girls who encouraged me – the learning that takes place as you are all sewing together. One person makes a mistake and shares it with the group, and naturally you learn from their mistakes – it’s a beautiful thing really.

Its not just sewing group where this beautiful artistic community takes place. I remember hearing my grandmother reminisce of knitting parties where socks were made during WW11.  In fact, to this day she hosts a knitting group in her home every week, claiming “It keeps your mind sane.”

Quilting, knitting, pottery, bunco, bridge – whatever the craft or skilled game involved there are many people who benefit from sharpening their craft in groups. What do you want to do but are too scared to start? Run a race, start a business, join a art group – whatever it is, find some support – some community in your particular interests. It will strengthen you, boost confidence, and reduce the temptation to quit.

Its a beautiful thing, really.

Rolling with the Punches
.