Our road trip found us passing right through Chattanooga which only means one thing to us!

We took advantage of this benefit and made an afternoon out of it. My boys were blown away by the huge train that looked like all the model trains we have at home!

It makes me a little sad that we don’t primarily use trains as a means of transportation anymore. The whole train depot idea seemed really exciting. Chattanooga Choo Choo train depot has done a great job of emulating what an old train depot used to look like! 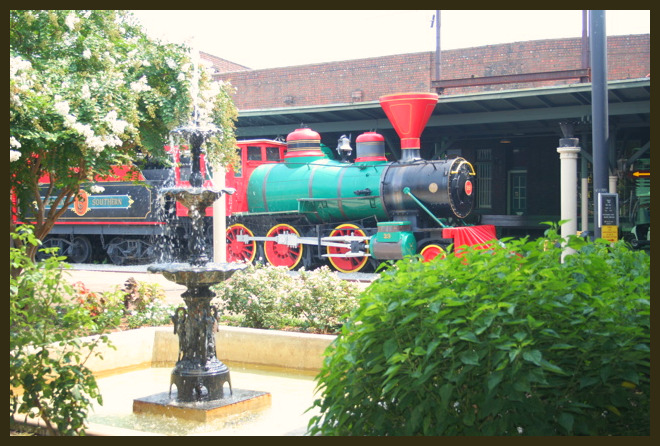 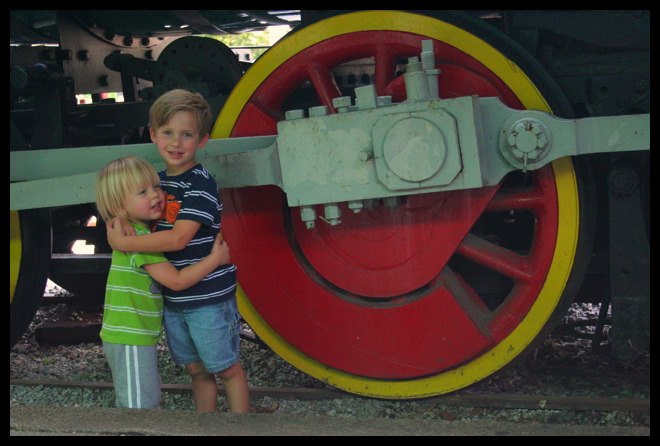 It was so bright outside as you can see by the overexposure! 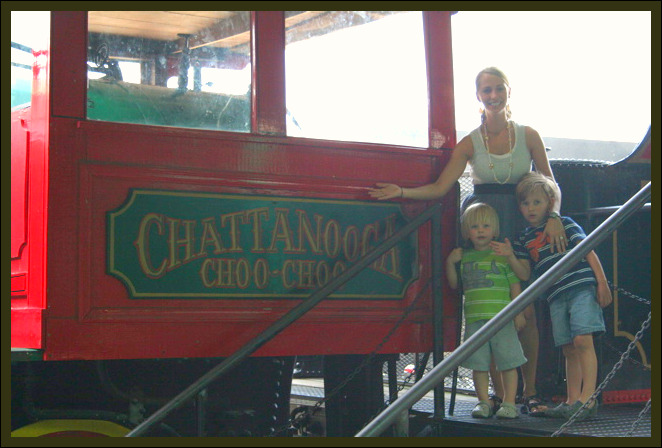 They were pretending to drive a train! 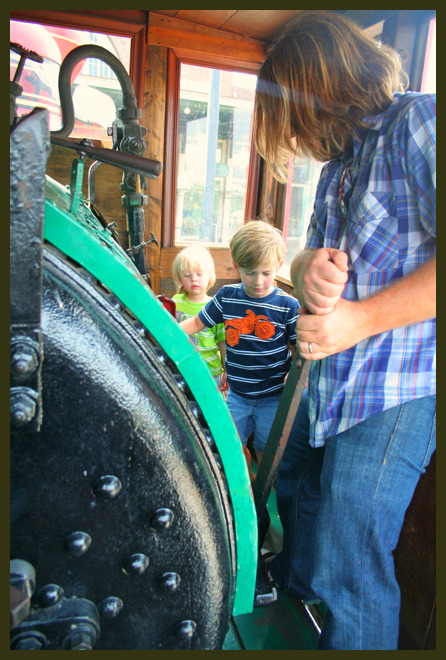 They had a model train floor upstairs, you paid a few dollars and you were admitted to the neatest model train display I have ever seen! The boys were mesmerized! 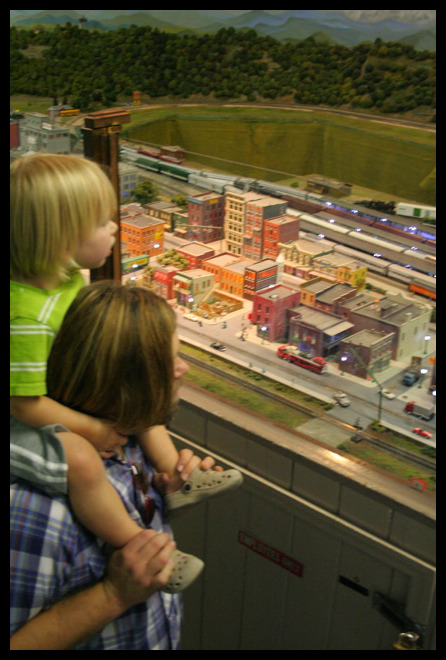 Their first experience with rock candy! 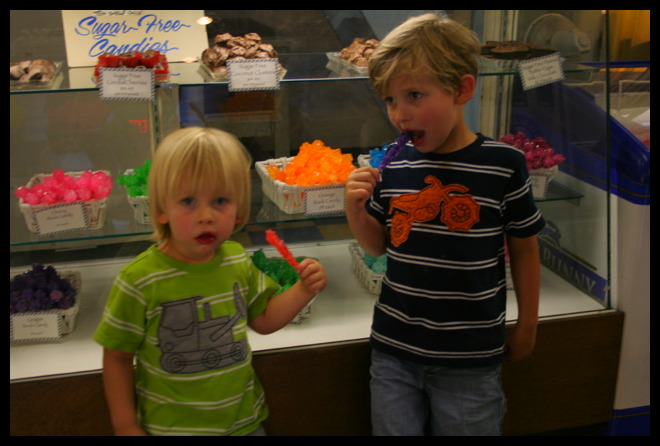 Summer is sweet……and the close of it?

That, my friend is often bittersweet.

There are a few weeks left before we jump into a regular schedule and I am soaking up all the last days of morning beach trips and afternoon pool dips.

With the recent return of a 12 day road trip in which we covered Atlanta, Chattanooga, Nashville, Ohio back to Nashville, a night in Atlanta and finally Brunswick- I am a bit behind. I’ve been unplugged for two weeks. Not a single bit of social networking fit in the schedule for me! The good news is I am back! Stay tuned. 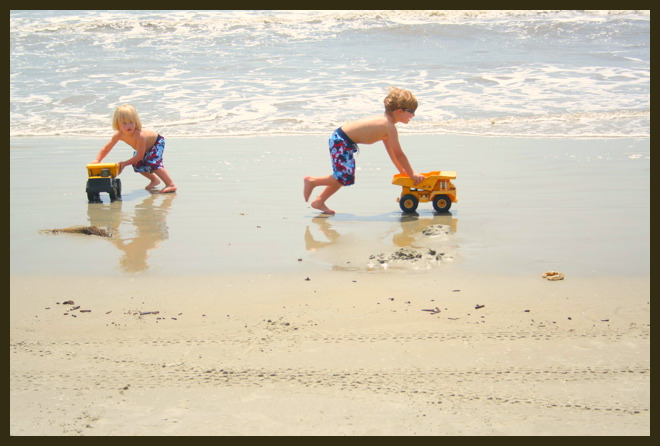 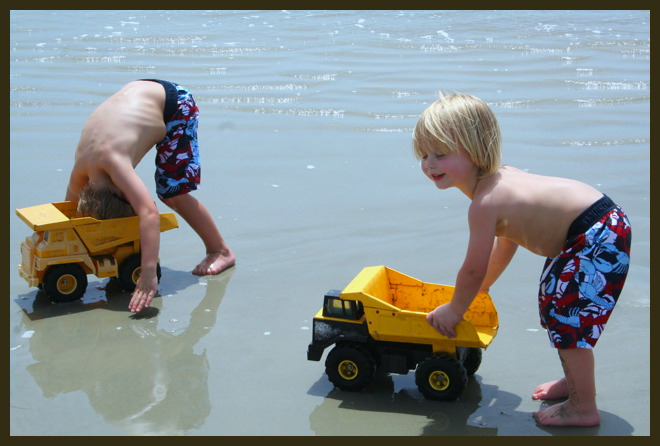 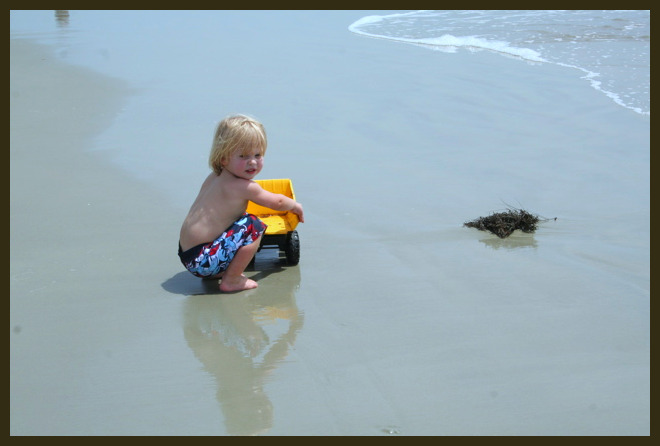 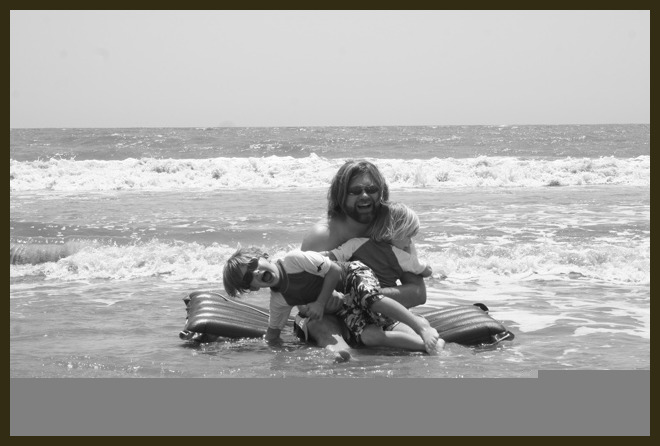 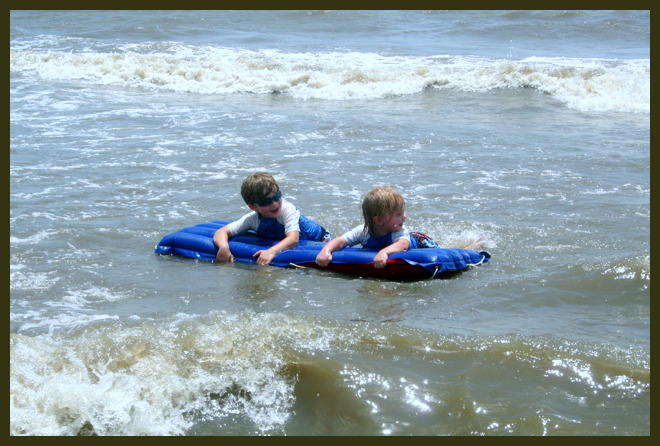 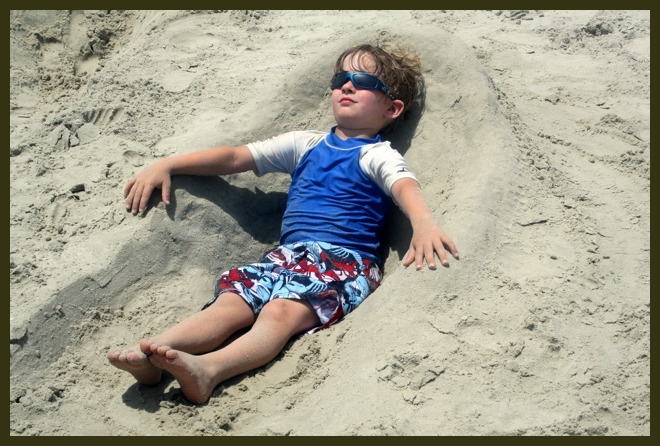 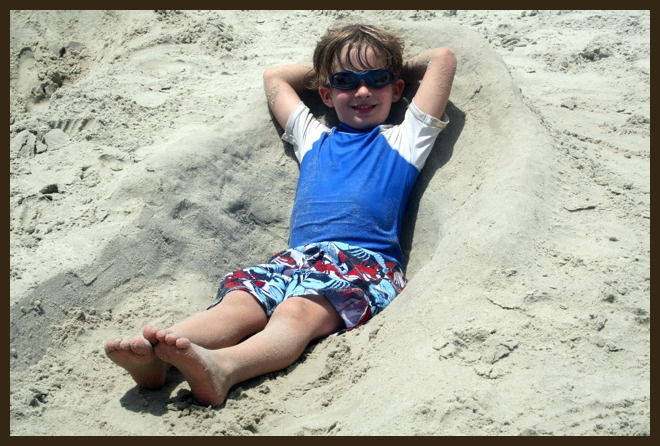 Summer Waves closed on weekdays so it forced us to set up shop in the backyard! 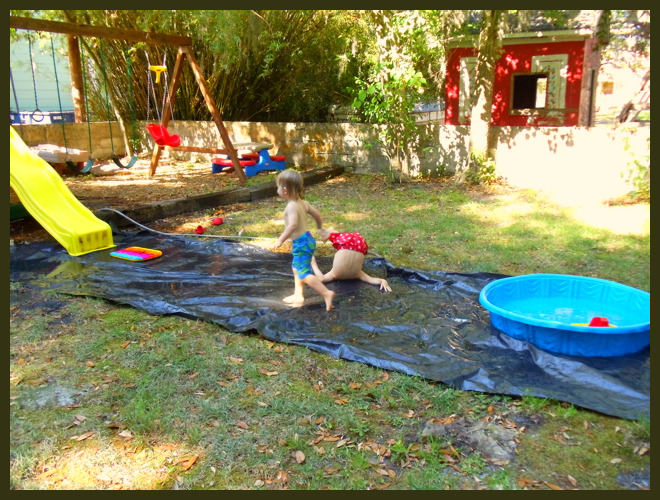 This book was completed almost three months ago.

I think it has successfully made the procrastination list. You know, the list you check things off of, and carry over two to three items over to the next day’s list – continuing this episode for, oh say, three months? Ring a bell, anybody? Well, that’s the case here.

So, without further ado-let me introduce you to a book I completed three months ago.

The book: Chasing the Dragon by Jackie Pullinger. The subtitle reads

“The true story of how one woman’s faith resulted in the conversion of hundreds of drug addicts, prostitutes, and hardened criminals in Hong Kong’s infamous Walled City”.

Why did I read this book?

One might wonder how a busy mother of two would come to read such a book.

Here’s the scoop: I was introduced to the writing of James Goll, due in part to my brother marrying his daughter (in 10 days!) When Michel Ann Goll graduated to be with Jesus almost two years ago her husband combined parts of two of her books (A Call to the Secret Place and Women on the Frontlines) to create a 40 day devotional titled Empowered Woman. Each devotional summarizes the life of a famous Godly woman. These overviews of Great Women have been so fascinating to me that I can’t seem to complete this devotional! I find myself continually distracted by getting interested in books she references.

Such was the situation with Chasing the Dragon. Michel Ann’s thoughtful summary of Jackie’s impact on China was enthralling. I discovered that my husband owned this tattered yellow paperback – in fact, he claims that he’s suggested that I read it numerous times since we’ve been married, but NOW my interest was peaked! I promptly found it on the shelf and dove in. This book was not on the 2010 reading list, nonetheless I am convinced that God led me to read this treasure.

An honest review has to reveal my frustration with the overall delivery – it sometimes lacked a sense of sequence: the account seemed to jump around a bit. Even so, I have never been so stirred and challenged by the account of a missionary.

I got mad at times.

I was shocked at the dangerous situations Jackie walked into daily.

I wondered how she had not been raped and/or battered by the dangerous men she was in constant contact with.

What did I receive from reading this book?

I was challenged to pray at all times in order to not miss the voice of the Lord. Every page records accounts of Jackie walking down the street and hearing the Lord say “Go here, turn down that road – you will meet a boy at such and such place.” – “You must go and witness to a prostitute on such and such street with the name_______.” The Lord seemed to speak to her in such detail. She also prayed continually and talks at length about her prayer life. I was encouraged to pray for daily wisdom and direction in all my daily doings.

I began to ask the Lord why I didn’t hear His voice as clearly and as often as she did.

It was as if God said, “Few spend their lives listening….when you listen and seek with all that you have, you’ll find that I am speaking.“

Spellbound, I am unable to articulate the full depth of this book. I was in awe of the goodness of God and reminded that we are vessels and the more availability we give Him the more useful we become. Jackie is a remarkable women who is credited with helping many opium and heroine addicts get clean, and turn their lives over to Jesus. She truly made a difference with gangs and prostitutes and addicts. I would call this book a thriller…. Really. The thrilling life of following the voice of the Lord in every situation… and trusting that every day would be filled with divine appointments to further advance the kingdom of God.

We have met and connected with some marvelous people this year.

Some such folks would be Aaron Keyes and his family.

Aaron wrote a song called “Not Guilty Anymore.” This tune truly resounds with my soul, echoing the heart of God our Father to us, his children.

I could describe it.

I could write the lyrics.

I could tell you the story behind the song.

I could further describe how the song has impacted me.

However, I think I will stop and persuade you to watch this.

Shannon recently completed this interview with Aaron regarding his song, “Not Guilty Anymore”. The story that inspired the song is dialogued.

When your done, click over to his site and listen to ” Not Guilty Anymore” when your finished there hop on over to itunes and buy it……. it will be good for the IPOD this weekend!

Give it a view and/or stop on over at TheWorshipCommunity.com for more details.

It was the first time I had attended a wedding in my home church. Hubby and I slipped into a back row seat, immediately we began to notice old, familiar faces we were eager to reconnect with. I took note of all the details while the usual events played out- processional, vows, kiss etc. It was nearing reception time, I glanced up and was suddenly frozen in thought. In front of me was an usher and the grooms mother. She had just wiped the fresh tears from her face. It appeared that tears had been falling on this womens face for quite some time. My mind raced through years as I imagined myself playing the role of the Grooms Mother. Future visions of tears falling in fresh abundance on my face flashed before my eyes.

My mental images then turn to the present. Why, this very morning we ran a typical family errand to Lowes. We were going to look for a toilet bowl lid to replace the one that had broken. Broken? yes, this tragedy occurred when Tucker was playing Curious George about the toilet top. He attemped to take it off while shattering it all over the floor and cutting his leg. Why do boys care what goes on under the toilet bowl?

Back to the point, the boys are in a stage where it is of utmost importance to hold mommy’s hand EVERYWHERE we go. Daddy’s hand will not do. We have often tried taking turns.

My plan: one boys walks with momma and the other with daddy, then we switch off after a few minutes. Sounds good, right? NOPE as of late, this plan ensures that one boy will relentlessly wail, ” I wanna hold mammas hand” while the other boy proudly walks with mamma. I always give in. I can’t stand it. This stage of the boys insisting on holding my hands is quite sweet, so sweet in fact that mommy usually ends up handing merchandise over to daddy and relinquishing buggy duties so that I can hold their hands. When the crying boy comes and grabs my other hand- he usually wipes away the tears, sniffs one last time and smiles real big.

AND ALL IS RIGHT WITH THE WORLD.

We prance around Target, Lowes, Harris Teeter, or wherever, but there is peace in our little world because mommy has two hands and there is one for each of them. As I relive the details of the morning, My heart fills with warmth, not the kind that comes from a fire in winter- this warmth will live on through the years by way of trusted memories. 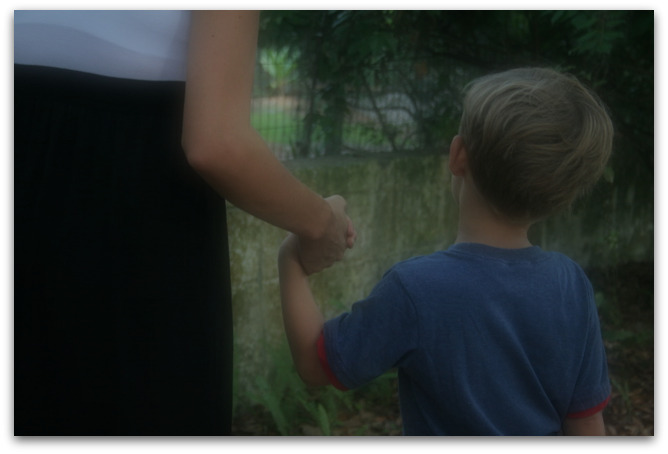 Back to wedding, I am still locked on the weepy mother of the groom, my mind is lingering on this contemplation: one day I’le be locking arms with a handsome usher walking out of my sons wedding. I pinched myself and said “ don’t forget how the boys would fight and cry over who held mamas hand at the store”. I determined to never forget the warmth that those sticky, sweaty, precious hands brought to my heart. 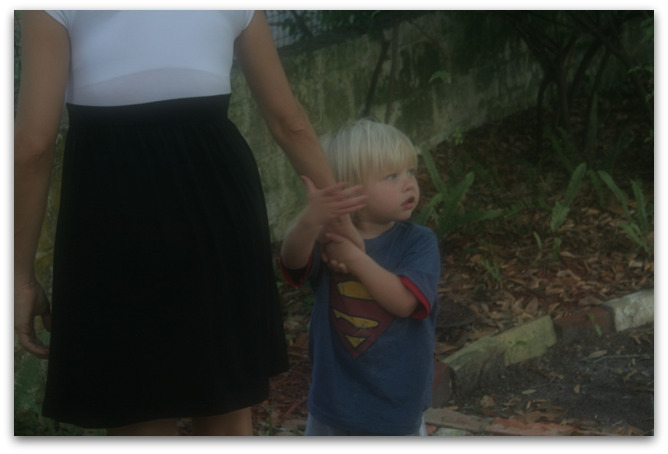 Lord, please help me to live in the present. Please arrest my thoughts when I get caught up in looking to the future. Remind me to treasure the moments of the NOW. Thank you Jesus!