Our Christmas Day was a bit of a blur to me. I remember Shannon saying ” come on, let’s wake the kids up” and I really thought ” I don’t know if I can do this”. I felt awful. Nonetheless I got up and pushed through. The kids had their new Mario and Toy story jammies on and were ready to open gifts! I did laugh heartily when Shannon said ” Boys, these gifts are very funny”! INDEED- they were wrapped in funny pages I had been saving for months.

On Christmas Eve- Shannon suggetsed we go to Jekyll Island Club for breakfast. I was thrilled to not cook and it seemed fun to get all dressed up. So we had quite a civilized Christmas Morning breakfast. The boys really did great and loved the food. We wiped noses about 500 times but besides that it was great. 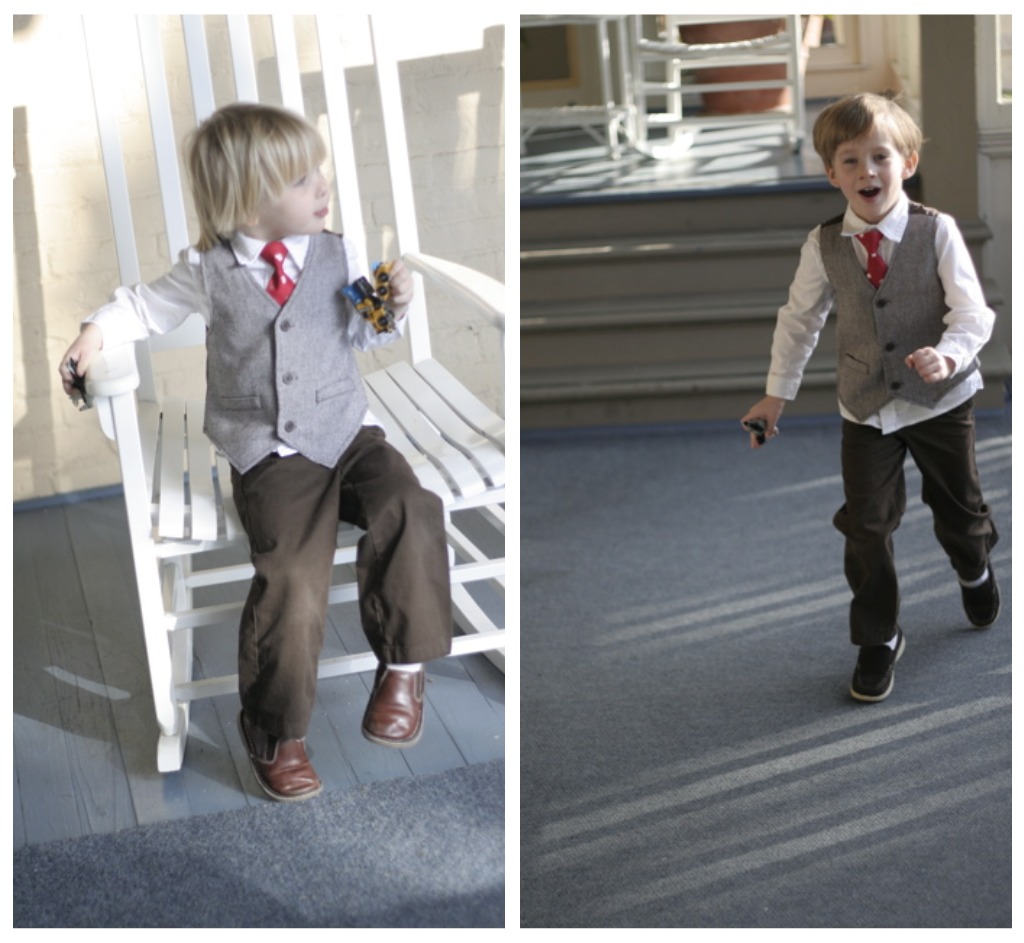 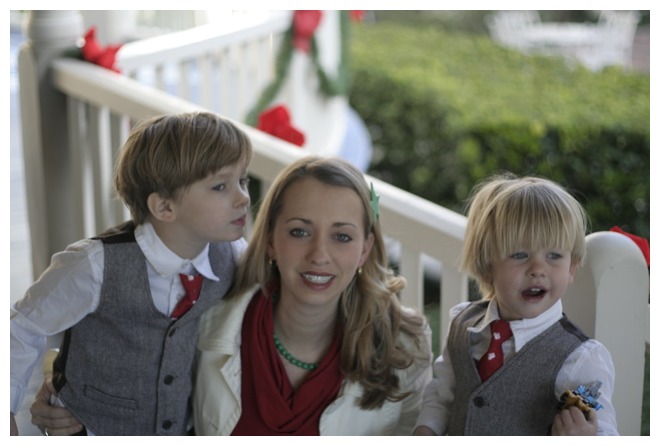 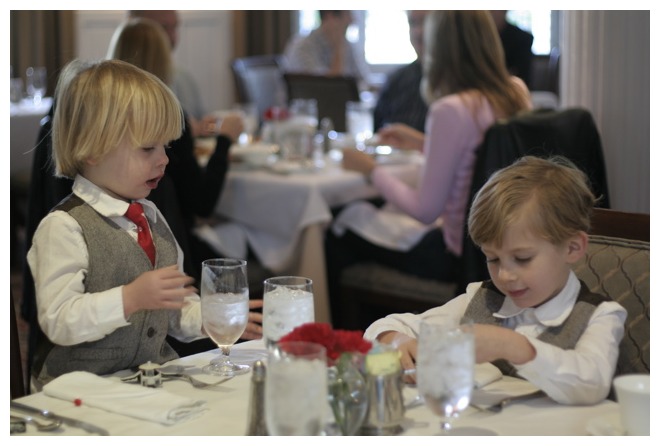 Kenimer was amazed that there were five juice choices. He tried them all! 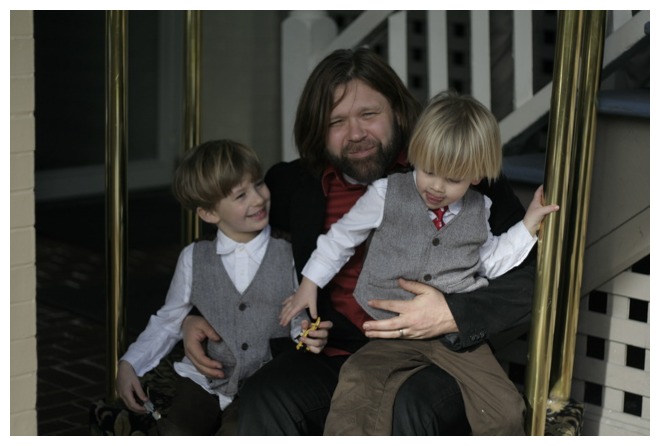 We went to my parents house to exchange gifts and eat lunch. There were many guests and we had a lovely time. I went into one of the bedrooms multiple times to lay down for a bit because I was feeling lousy. But the times were sweet. The thing I definitely remember is that we came home with Buzz and Woody. They have officially entered our family. They have beds in the dump trucks, their teeth have been brushed, they have almost gotten a bath ( I rescued them!). They have brought lots of joy- though we are always looking for Woody’s hat! Thanks mom and dad for the gift of the year! 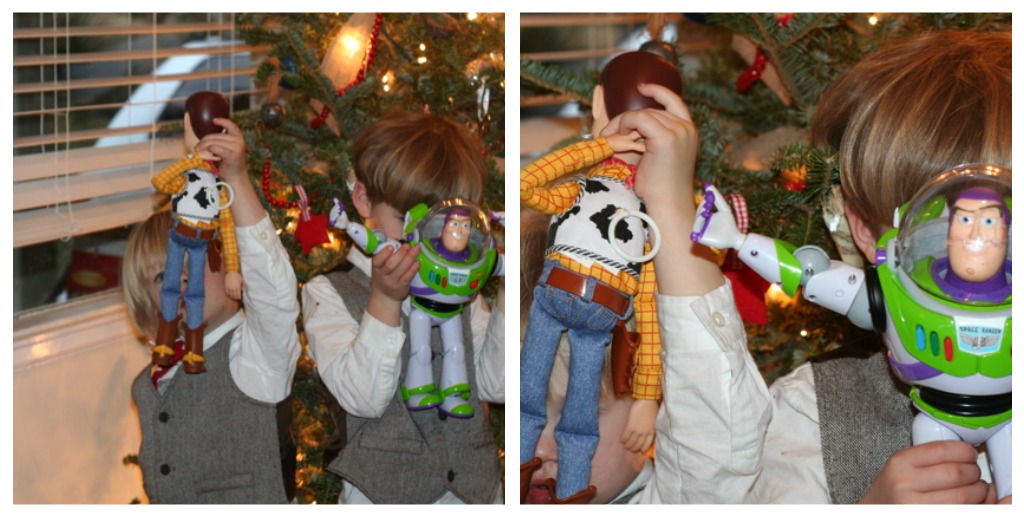 What a blessing Christmas day always is!

Shannon and I both at the same time said ” let’s have some people over tonight after the kids go to bed”. Thumbs up from both of us sent the plans into full sail. Besides I had been itching to try a photobooth after being inspired by a photo stylists blog who I am learning from! She posted about the DIY Christmas Photobooth. I learned about Alexis @ AVE styles through Promise Tangeman who was also part of the DIY Photobooth.  Her blog has been really inspiring to me! 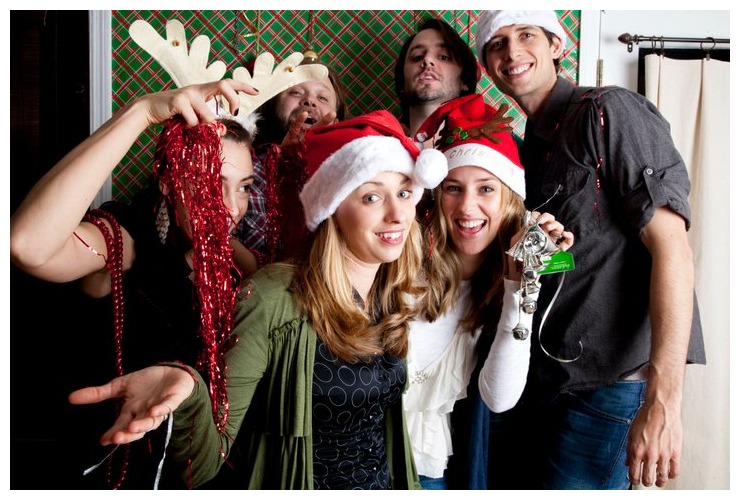 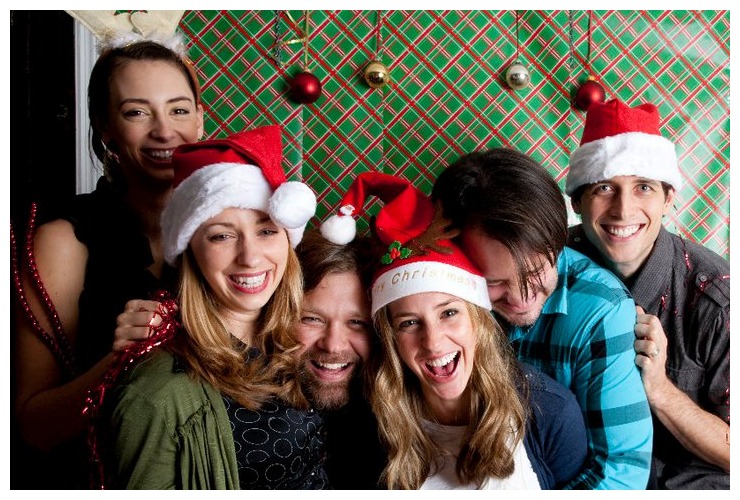 They ended up being a lot tackier than I had planned. But better than I imagined. I love the pure fun. And I love that I got to have a ” just for fun” shopping spree to the dollar tree!

This is the point where i am not sure if I should claim having assisted with styles and prop development. Hmm. The girls got some amazing laughs while watching our guys. It almost seemed more like a therapy photo shoot? Maybe unleashing all the holiday frustrations? It was fun to say the least. 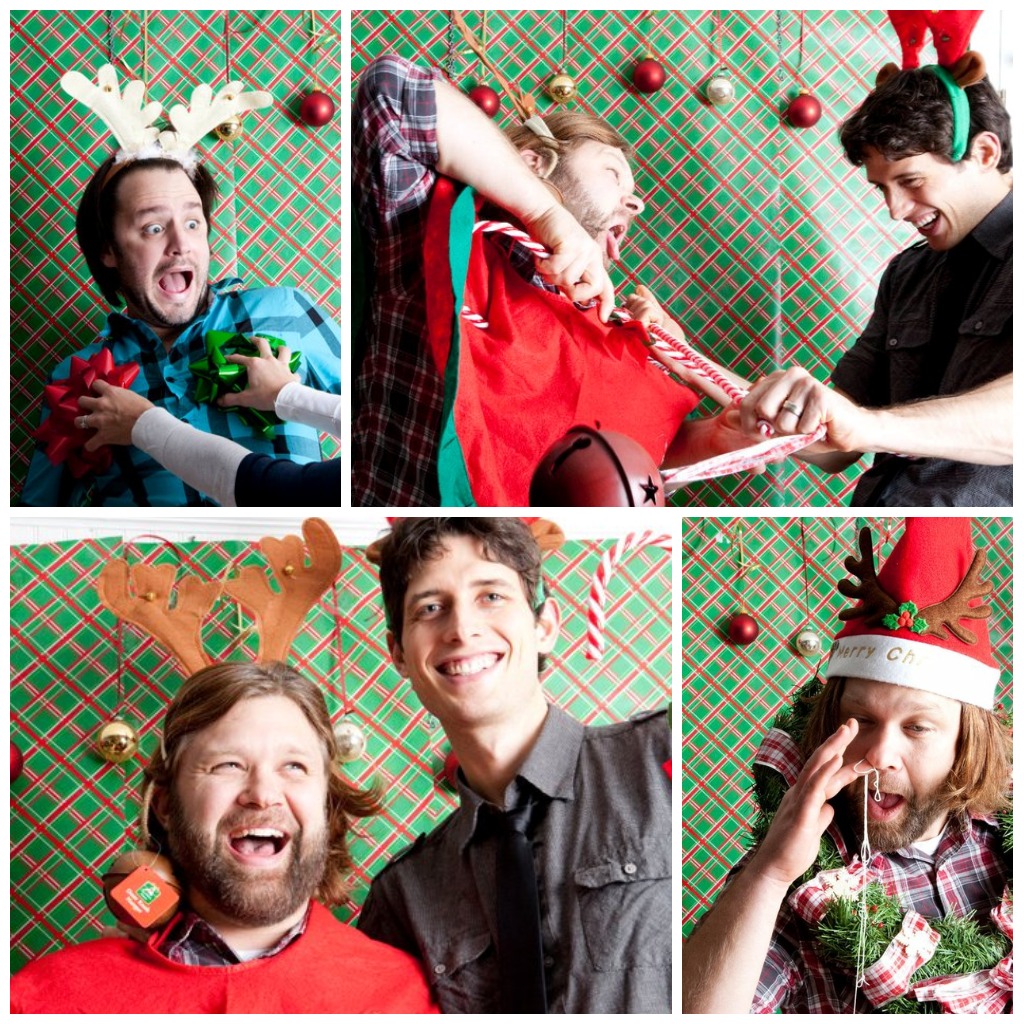 Next time I will probably make the backdrop a little bigger. Thanks to Bethany for having the final vision for the backdrop! Thanks to Sarah for providing the Equipment and taking most of the pics.  I encourage you all to check out Sarah’s account of the Photobooth  here. I am so very thankful for dear friends and precious sisters and brother- in-laws! 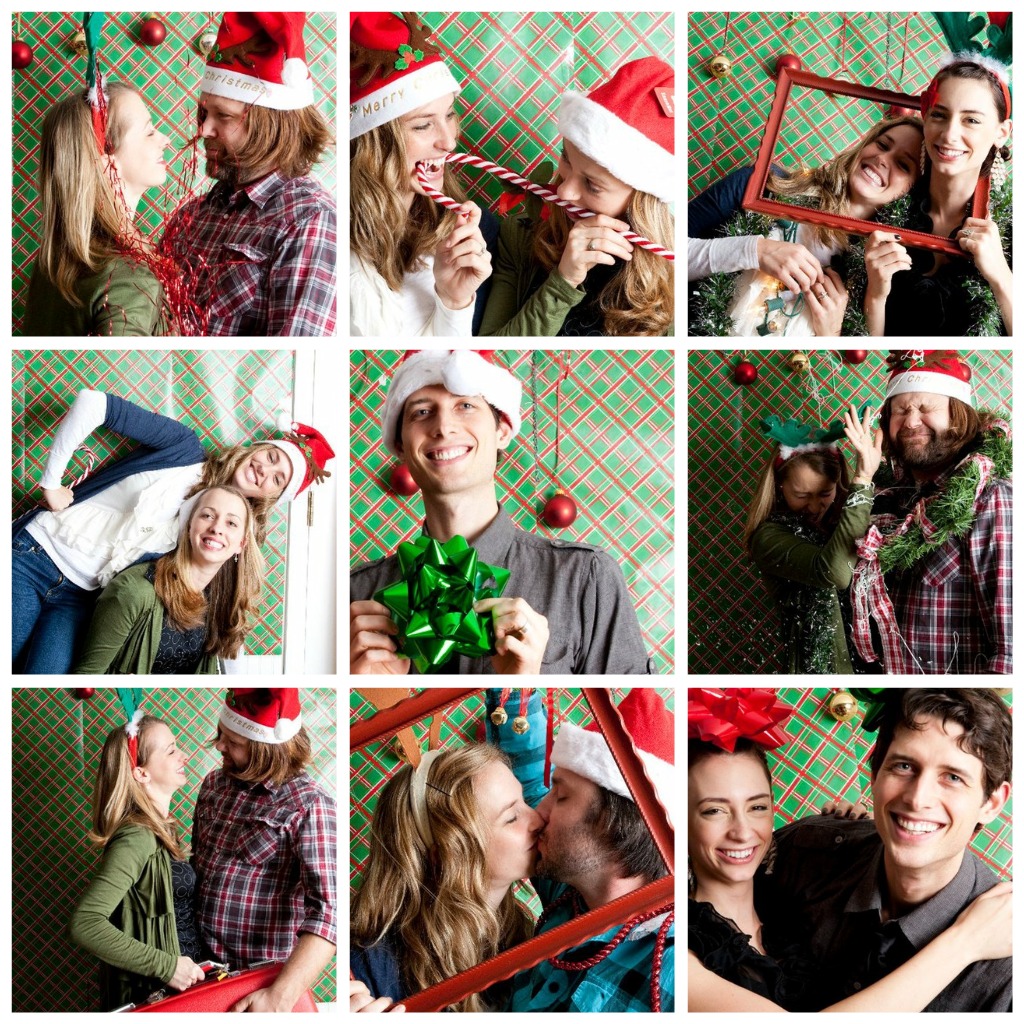 Fun is quite Therapeutic! I have to admit I was fighting the thoughts that said ” come on this is silly, you need to spend your time and energies on more productice things”. That’s the non- risk taking fear- filled adult that sometimes rears it’s ugly head in my mind. I fight it with all I have ! I hope these photos put a little smile on your face!

The cheer has been spread these last few days with kleenex, chicken noodle soup, tylenol, cough syrup, and most anything else sold on aisle 6 at CVS.  Nonetheless we are resting up for Christmas day- because we were busy bees those first few weeks of December. 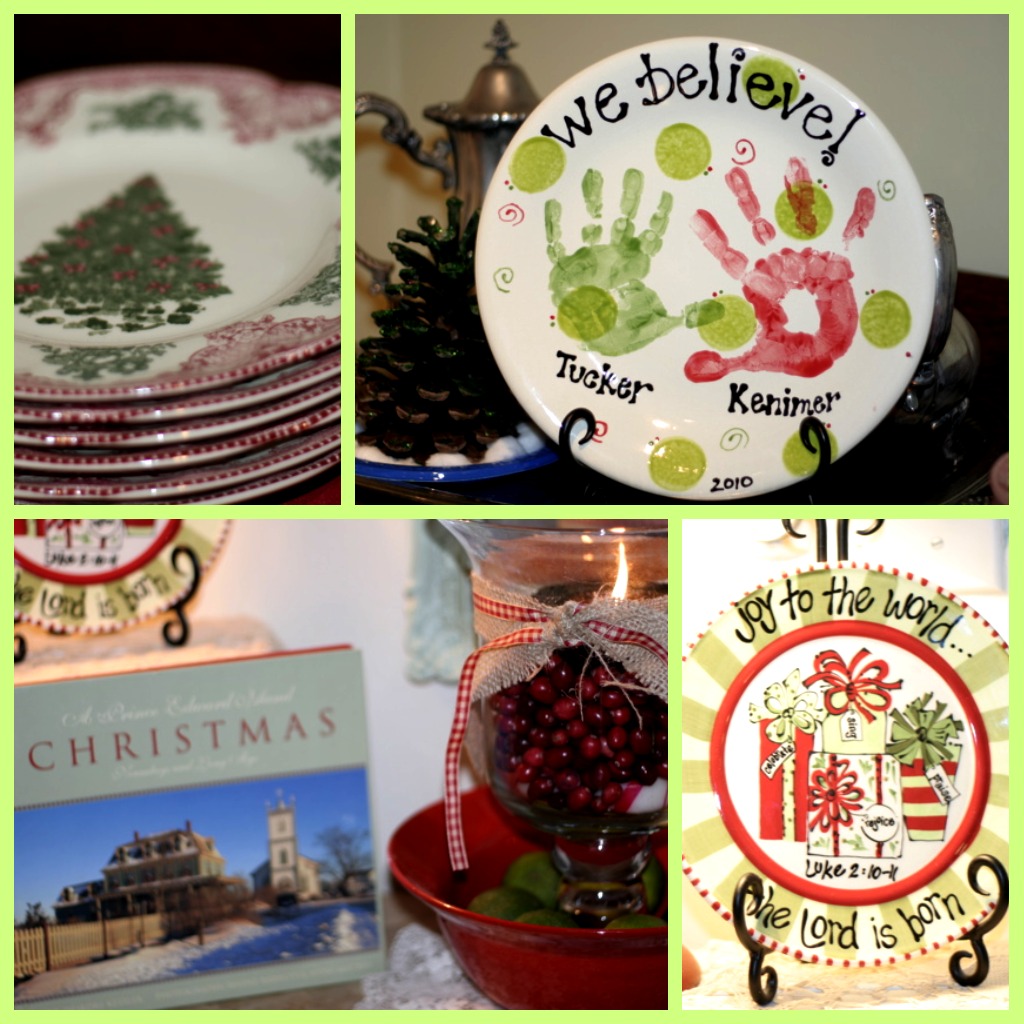 1. Christmas plates that go along with my everyday china. Shannon bought them our first christmas 2. Handprints the boys made at color me happy- the words are quite a mantra for our family this year. 3. This book was bought in Prince Edward Island on our Honey Moon. The pic on front is the bed and breakfast where we stayed. 4. A plate that was a gift- I love it so!

My mantle is combined with things from outside. An old pair of lanterns, Christmas cactuses put in paint buckets, wrapped in burlap. Details are made with ribbon, ornamental words antiqued in coffee and fragments of ticking- can’t forget the painted stockings from Color me Happy!

I decided to use limes and cranberries as my primary decorating inspiration for color and the star was the theme.  The limy-mint green was a nice change from all the deep hunter green. A  large amount of burlap and a magazine article in All You ignited the desire to make a runner. It was so much fun to make- 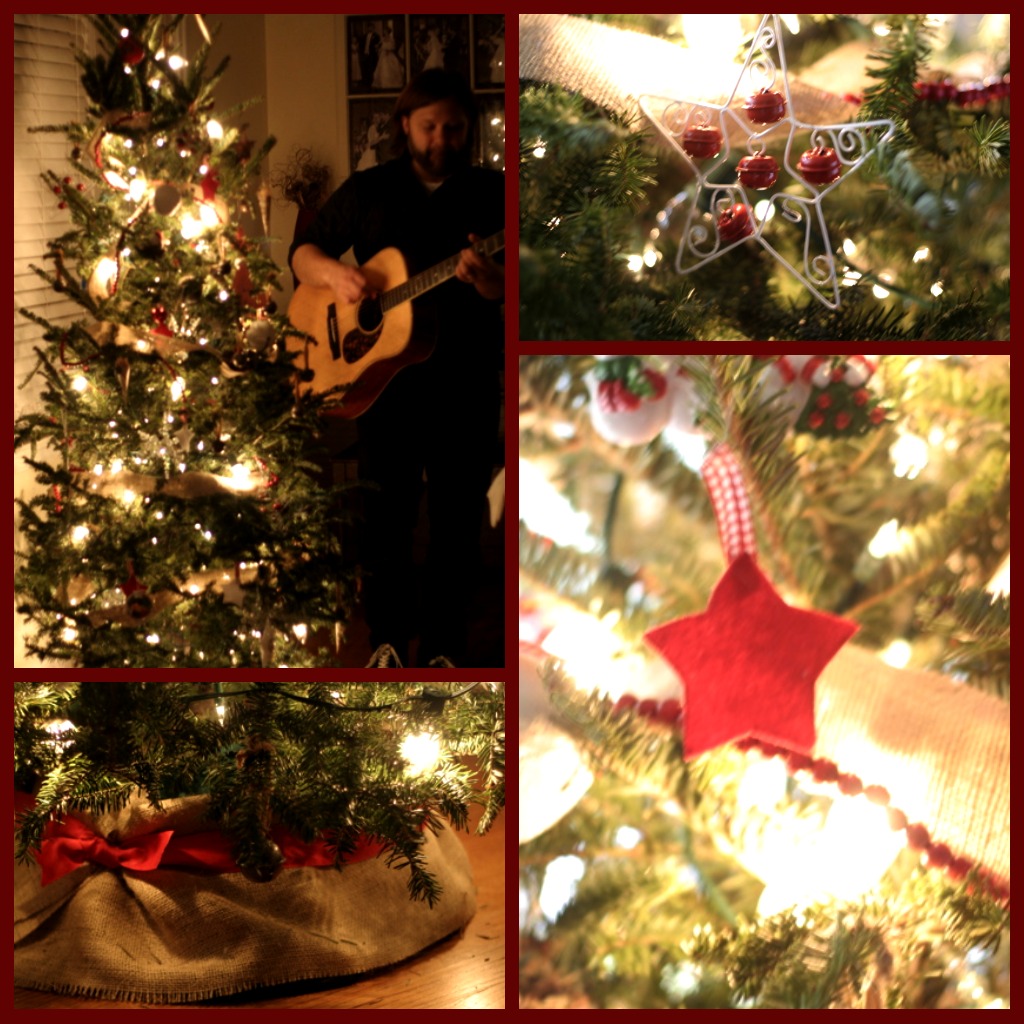 Who is that Rocking around the Christmas tree? The star just had so much significance this year. Thinking of the three kings following the yonder star. More burlap fun- wrapping the christmas tree in it. and making a garland for the tree! 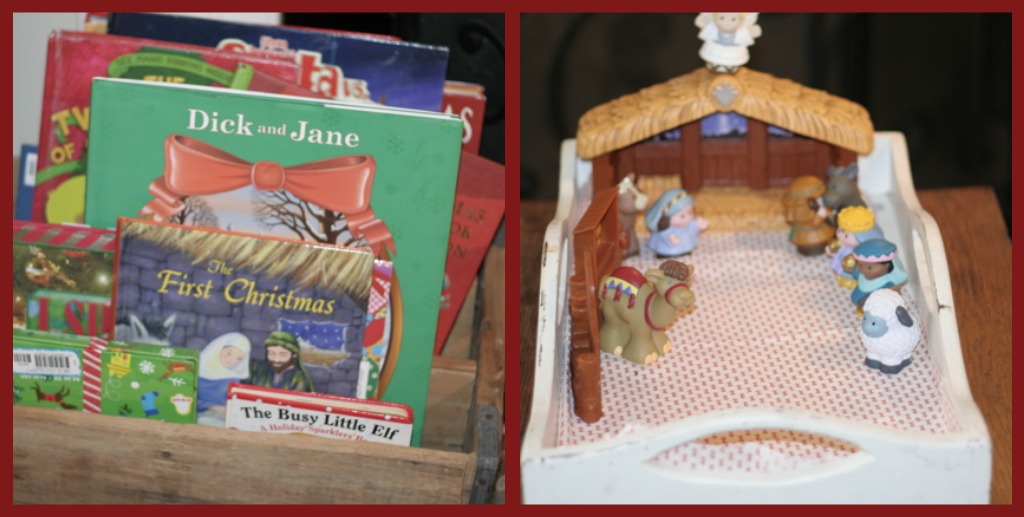 For the little people that live here: An old pepsi crate turned on it’s back to display Christmas books by the fireplace and a little people nativity sitting on the coffee table-so they could play til their hearts were content. I know baby Jesus is missing in this pic. We found him soon enough!

I wish the lights could stay up year round- their are so twinkly and nice- I had to eat my words this year. I said I would NEVER get an inflatable- ever ever. But my sweet grandma knew how my boys loved them and sent money to buy one. Shannon couldn’t quite bear a 7ft Santa so we comprised and got the ” blow- up Choir” as my boys call it! 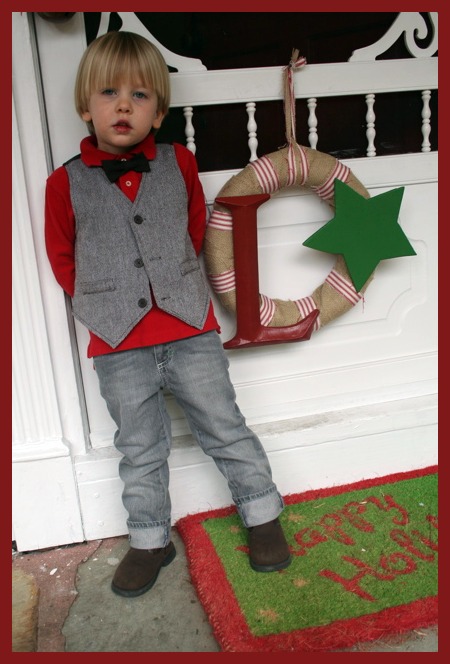 I was trying to snap a pic of my wreath I made with burlap and ticking and Tuck insisted on posing.We were headed to Kenimers play and might I add he was styled by the Madre– don’t ya just love the bow tie from my sisters wedding and the grey skinny jeans? This was right before we discovered the double ear infections and bronchitis.

I am  continuing to ask the Lord to restore my heart with Thankfulness. This week with sleepless nights, missed parties, cancelled social outings and lots of home -time I have had a chance to revel in the simple things- like Chicken noodle soup!

The first week of Christmas is especially exciting for me as I celebrate the birthday of my youngest son. Yes, December 2nd- Tucker was officially three! I will never forget the nesting whirlwind that attacked three years ago, I had all decorations out, shopping done, dinners made and in freezer and much more.

We had a Christmas is coming themed family party with a Polar express twist! On December 2, I planned a special day. We started with our tradition of eating donuts for breakfast- Since Dunkin is around the corner. Then lunch with daddy… much to my efforts he didn’t seem to care too much. However, three days later when his party happened, he was pretty pumped!

This year i planned a family activity. We cut out cookies from sugar cookie dough- cooked them and then had a decorating extravaganza. This was extremely fun- everyone really got into it! Apple cider was brewing and the christmas cheer was in the air! 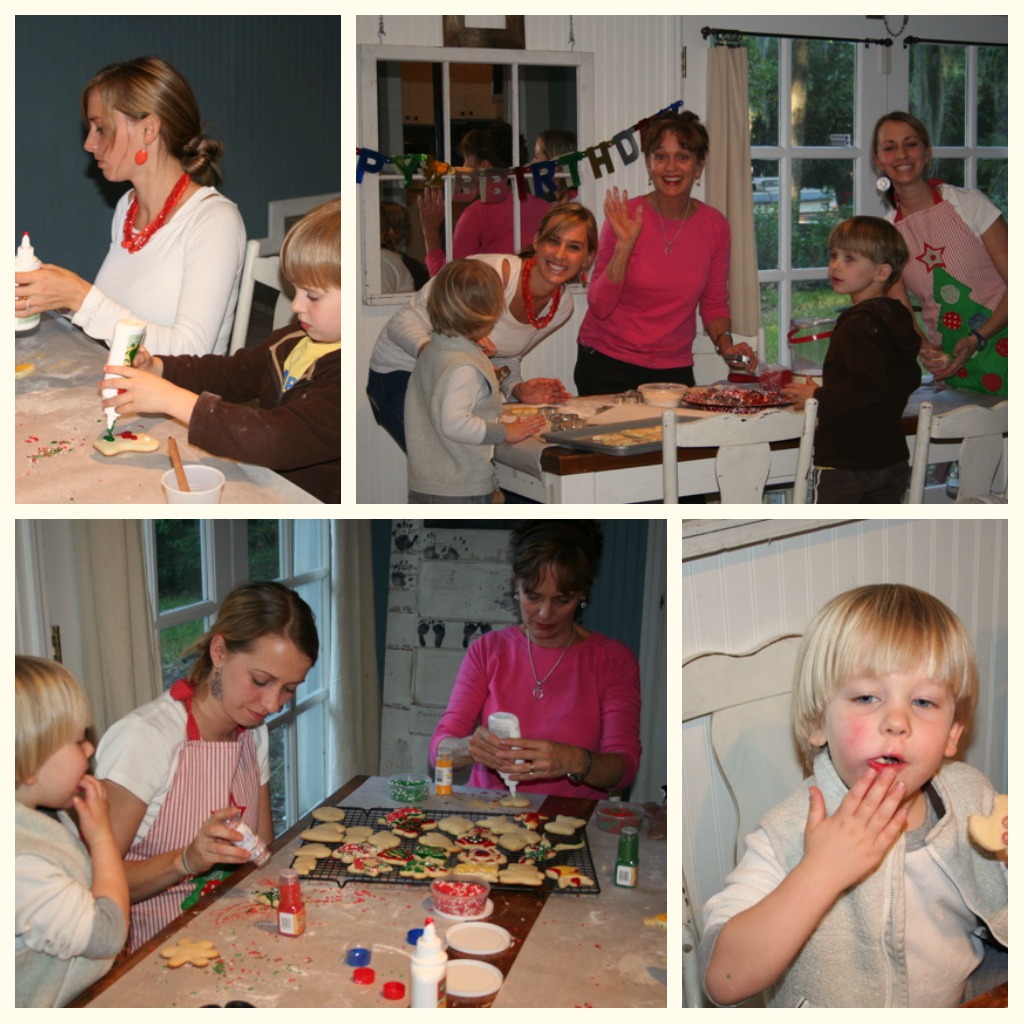 Everytime I set Tucker up to decorate he would start eating the cookie! oh well, they were delish! 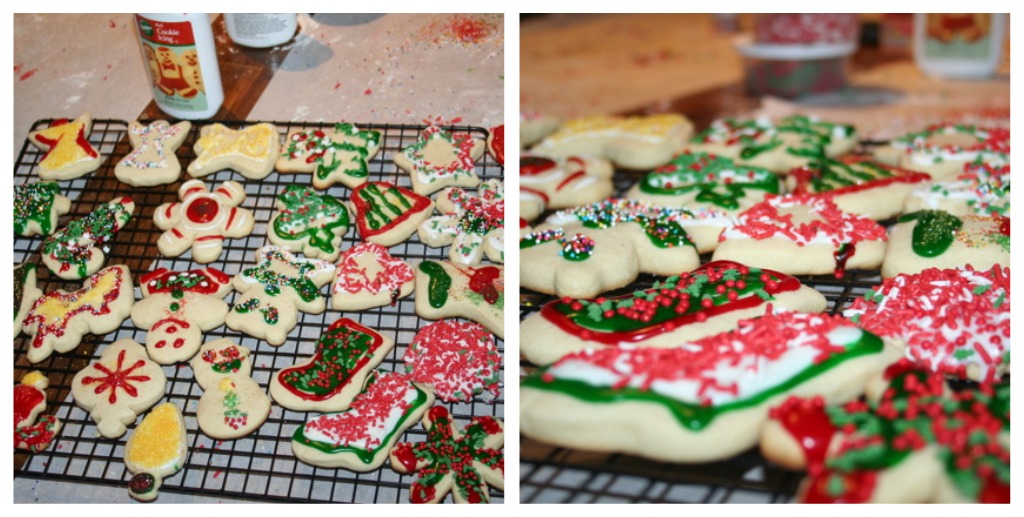 I think it’s really special that he was born during the christmas season. I will never forget how full my heart was that first christmas. He was three weeks old!

The night of the family party I drifted off to sleep with incredible thankfulness for a sweet family that lives nearby. It was so precious to celebrate Tucker’s birthday with all of them! 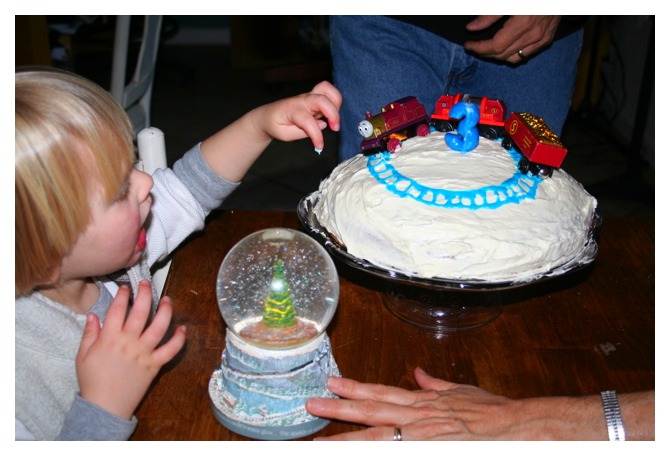 Tucker- your amazing. smart- unbelievably strong willed. Sharp- nothing gets past you. You love your brother. You love Candy and you can climb anything! You delight everytime I seem you coloring, painting or doing puzzles- which is pretty much everytime I look at you!  Your so special and I know Jesus has a special plan for your life.  Happy Birthday, Tucker! 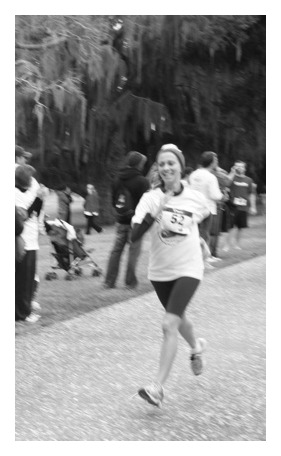 I completed a First this weekend. I ran a 5K race! I hope that as the years unfold I will continue to tackle firsts. This one was particularly enlightening to me because it is completely out of character for me. I have always considered myself a non- runner. I have even declared I could not run- blaming the assumption on chest pains and such.

A pal of mine recently spoke to a group of women about the benefits of setting physical goals, training and running races. She spoke of her own journey and how she had continued to improve and the affect she saw on her mothering, physical condition etc. I sat in the audience with these thoughts. “ Oh, it would feel so good to be able to run an ample distance successfully- but there is no way, I cannot run”.

Days later at a party, I heard some friends talking about this jingle bell 5K race and spontaneously I decided I was going to do it.- no matter what. When I told the husband, I thought he was holding back laughter. He believed in me but also knew I displayed almost zero endurance.

I promptly tackled the training period, starting small. I remember achieving a mile in October without stopping and wondering how I was ever going to run 3.2 miles continuously. I knew i could stop and walk in the race but my goal was to run it entirely.

What I learned is that my body could do physically more than I imagined. I started running with a friend who is experienced and she observed my stride- noting I was often clenching my fists and tensing my arms contributing to the chest pains. I also learned that I just needed to run through the pains that occurred. It is amazing how they stopped and I realized HOW OFTEN I WAS USING DISCOMFORT TO STOP MOVING FORWARD. This truth has correlated so much to my character and spiritual growth. When it gets uncomfortable we often stop. Is is only when we push through the pain that we see growth.

Therefore, since we are surrounded by such a great cloud of witnesses, let us throw off everything that hinders and the sin that so easily entangles. And let us run with perseverance the race marked out for us,

I have seen growth in my physical body as I pushed myself towards a goal. Simultaneously I am anticipating growth in my personal life as I push through discomfort with Thankfulness. It is gratitude that will push us through the stretching, trying, rough spots.  In the Bible, the Christian life is often described as a race to be run.  Similarly a race requires perseverance, training and commitment. The parallels to the Christian life are evident. We should rid ourselves of all hindrances.

I didn’t stop. I ran the entire way with no pains. I was further excited that I achieved my best time thus far and placed well! And to think  six months ago I said I couldn’t run! INDEED I CAN. I am blown away and saddened by how many things we are capable of doing but don’t because we believe the lie that we can’t! What do you think you can’t do today?