I had no idea where the night would lead or what heavy conversations I would be having with the five year old. All I knew at the moment was how tired I was from all the yard work, the bug-slapping, bite-itching and kid-whining. We had intended to have a family outside-chore afternoon but the nap engulfed us all, leaving our family of four attempting outside chores way too late.  WAY. TOO. MANY. BUGS.

The hubs and I were examining some vines that needed to be removed before retreating inside. I desperately wanted to escape the bugs while feeling stress about what lay ahead: hungry, bug-bitten kiddos starting the 7 PM whine-fest.  To worsen matters, I had nothing planned.  My sometimes angelic husband uttered the words that are gems for any mother:

“Hey, I have some extra cash, You wanna go grab some dinner? It’s late and I know it would be easier for you.”

We didn’t wash up or change clothes before hopping in the van. This was a drive-thru car-picnic kinda family outing. Somewhere between the chick fil-a drive thru and the Skinny Petes parking lot the husband started answering my questions. You see the hubs is insanely smart. When I want to know anything scientific, he’s got the answer. The topic was Earthquakes.

I began to realize I had not really looked up any news reports about the Japan Quake. We were soon home eating takeout and watching videos of the Japan Earthquake, and educational videos about plate tectonics. Our five year old was very interested in all of this, and within minutes we were teaching him all about earthquakes, tectonic plates, fault lines and tsunamis.

We started to realize the golden opportunity we were sitting in. I think the Lord was prompting our hearts. I suggested  we pray together for Japan. We gathered on the floor and held hands. We started to cry out to Jesus but were continually intererrupted by an inquisitive 5 year old…

“Where are their mamas and daddys? Where are their toys? Are they hungry?” We answered and he continued to concoct this super hero story in which he would save the world and rescue the people, each new strategy involved daddy’s power tools. The five year old continued on and on while we tried our best to teach along the way. The three year old was soon asleep on the couch and carried to bed, he was not too concerned about Japan. As I walked through the hallway back to the family room I could hear the five year old still declaring his heroic plans to save everybody, Shannon was still answering some deep, hard questions.

We told him that he could ask Jesus to send angels to help and comfort the people of Japan. He wasn’t quite ready to lay down the superhero mantra.  Shannon and I went to Kenimer’s room and spent another half hour processing and teaching about the recent tragedy.  Kenimer wanted to talk all night about it. Shannon was nodding off and I could barely hold my eyes open. Sleepily, I attempted to close the discussion with “If you continue to think about the children of Japan, pray for them, Everytime the thought comes into your mind, pray, don’t stop praying“.  We prayed over him, shut his door and prepared for bed ourselves. I climbed into bed and thought I heard talking from Kenimer’s Room. I wondered if Shannon had walked back in his room, but that wasn’t likely since I heard water running in the bathroom.

I got up and walked near his room when I heard the most precious sound. I heard my five year old emphatically asking Jesus to help the children in Japan find their mamas and daddies, give them food to eat, help them have new toys, help their town to dry up and all sorts of other relevant things I can’t remember. I realized my five hear old was interceding for the country of Japan.

The next thought: “Maybe we are doing something right”. Then a prayerful plea whispered “Oh God, please help me to cultivate this compassion in my child” – “Please show me how to respond to his desire to save the world and give me the words that would promote growth.”  And lastly,  “Give me the same compassion for Japan.” 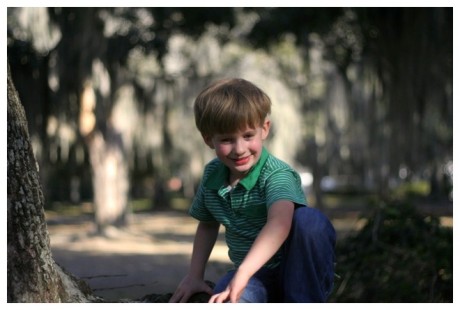 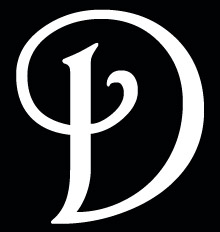 0 not despise small beginnings. It is so easy to do.

To think that we are failing because our dreams are not moving along as quickly as we’d planned, the climb to our goal has become a standstill, and we are left battling the fierce enemy of discouragement.

The phrase written above is near and dear to my heart. Why? You might ask.

My husband and I have some mighty tall dreams, placed in our hearts by our maker – larger than we can conceive. Through faith and more faith, we have seen small. humble. beginnings.

This is also the phrase that opened my first ever published article. I still wonder, where did this article writing business come from? I thought I was a songwriter.

Here is the back-story: my husband is always busy writing and co-writing songs. Sure, I write alongside him, at times writing by myself, occasionally writing with family or friends, but mostly I critique his songs, adding lyrics and ideas. But, if truth be told, what’s usually brewing in my mind are the stories. I think in stories – I tell stories – I collect information all. the. time. Most daily events in my life could become a story. The problem? Finding anyone that wants to hear all the stories and/or facts.

I started blogging as an outlet for the growing collection of stories in my head. It’s been mind blowing how many daily happenings evolve into stories with an important truth that needs to be told.  The blog was a perfect place to do this. I am always researching any subject that interests me. I have learned to turn this characteristic off when socializing… or at least I turn it down a bit. I try (I said try) to wait for questions or an inquisitive comment, then I try to be tactful about unloading my information (again, I said try).

In June 2010, I was casually approached about writing for a publication company that releases magazines in numerous towns throughout the South. I received my first assignment in November. I dug in,  and lo and behold, guess what i had to do? : GATHER INFORMATION; READ; SEARCH; FIND. “Get out! You mean I can get paid to find information???” Of course there is the compiling of information, pouring over notes, listening to interview’s writing, writing, editing and more writing and editing.

So it begins the first article was written via phone interview and lots of research. It was challenging but I loved every bit of it. Then came the second article. This one is currently in the hands of the designer.  One day I heard about a local women who created an organic skincare line. I was so intrigued that i stayed up way too late reading all about her inventions and learning tons of healthy living information. Like I said, I am innately driven to become a mini expert on any subject that sparks an interest, no matter the cost. Kinda weird, I know.

Would you believe the next day I got a call with an assignment to write an article about her. I was stoked. Now, I am starting a third article. I just recently began to employ Evernote to help me organize all my clippings as I research before conducting the interview. Oh and throw in a little photography and a little styling for photos and you’ve got a creative feast for this girl. 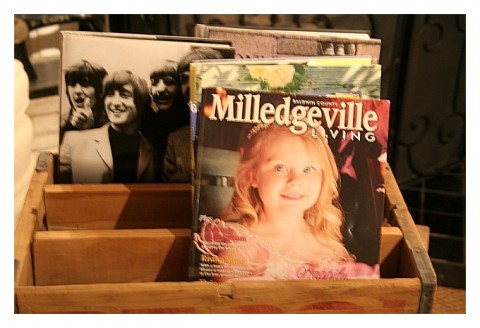 My heart did a little jig when I received the magazine and still, two months later, I like knowing there is an article in that magazine that i wrote. Yeah, right there by the Beatles book. Ha!

This is the year to put woulda, coulda and shoulda in their respective place and JUST DO IT.  So I did.

I am now a twitterer! You wanna tweet together?  Follow me HERE.   It’s hard to not join a social network with a birdie symbol! #ILOVEBIRDIES!

Seeing that spring is making it’s grand entrance, not only did I join a social networking site with a birdie symbol I gave my front porch a makeover, beginning with a front door wreath showcasing a birdie family. 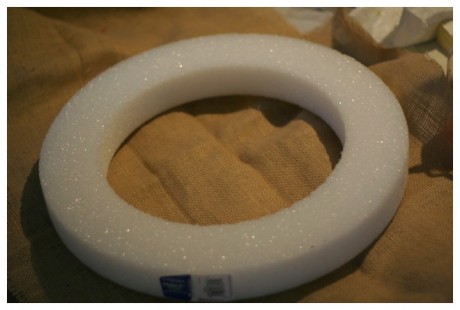 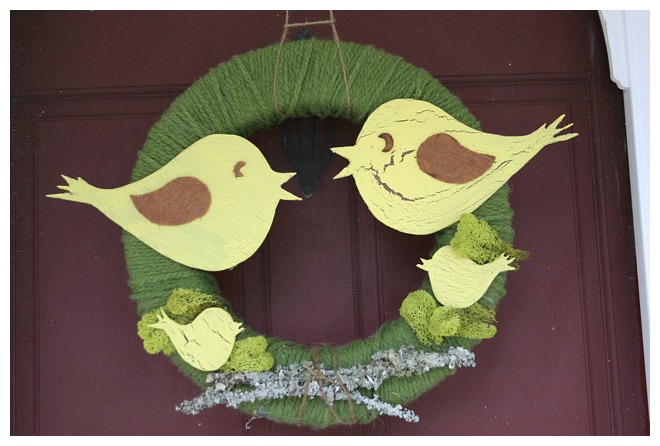 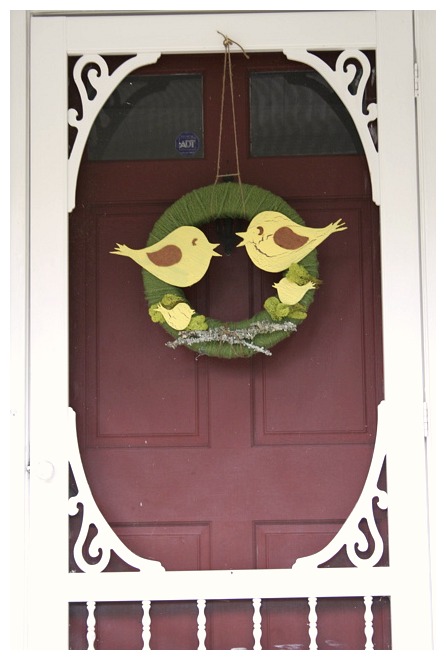 The idea started when I saw a yarn wreath on The lettered cottage, and ended after my patio was covered with yarn, crackle glaze, paint, saws, wood, sticks and moss from the yard! I have to give credit to my husband for cutting and drawing the birdies. The combo of the yellow birdies and the wreath really make my heart sing every time I pull in the driveway!

Here is a little more spring for ya! 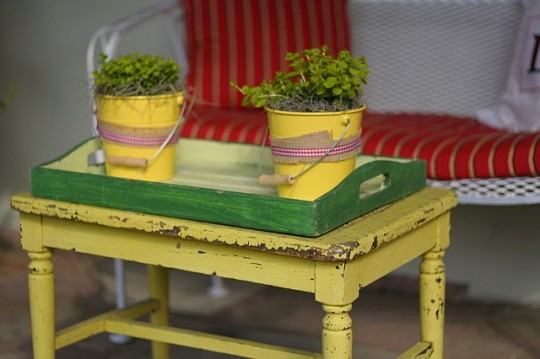 Thanks to target dollar store for the yellow buckets and yard sales for the cracking peeling yellow table. Sidenote: The naturally cracked table was inspiration for the crackled birds on the wreath.

I decided to give these stone urns a makeover. Black spray paint and new flowers did the trick. 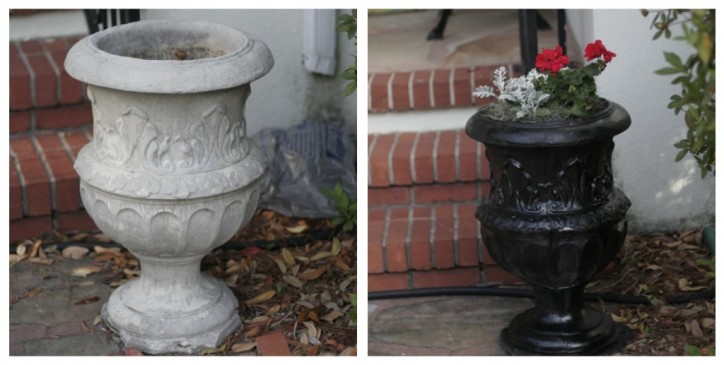 I found myself sitting on the porch a lot yesterday. Adding inspirational items to my daily surroundings definitely sparked the expectancy of springtime. As I type this post my thoughts drift to the weekend and the good friend-time that was sprinkled throughout. I was able to catch up with a few friends, I heard about upcoming changes, babies, moves, transitions and I was reminded about the newness this season often brings. For me, I am continuing to strive for a life of thankfulness. It is through thankfulness that my hear will be restored and made clean. It is through thankulness I learn to live in the moment taking each day as an opportunity to see the Lord glorified in me.

lastly, leave a comment and tell me where you see spring in your life? Let’s talk.

I missed Monday’s post and since I normally post on Mon/Wed/Fri I usually wouldn’t post again until tomorrow, unless of course there is something really important to share… and there just happens to be: my amazing brother, Mckendree Augustas.

He’s the sweetest brother of all times. Seriously, he called on valentines day when I thought surely he would miss it this year.  After all, he is married now.  Nonetheless, he still took the time to let the other special ladies in his life know they are loved.  ‘Nuff said about sweet brothers, let me tell you what neat thing has happened to brother today. 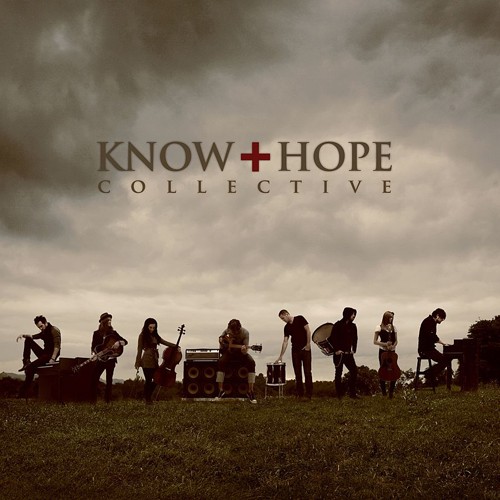 A song that he co-wrote (in fact, it was originally his song, but it was re-written), Attention, was recorded by the former members of Audio Adrenaline in their new project, Know Hope Collective.  This is quite different from the classic AA tunes we all loved – or at least I did!

This song is an excellent corporate worship song and the CD has hit the market today!

So take a minute, spend a dollar (or $10 – the whole CD is great), hop on over to iTunes and purchase the song. You’ll be glad you did.