The Lewis family took a trek up to the North Carolina Mountains a few weeks ago. Shannon and I led worship for a middle school camp. The site was called Living Waters and was just a few miles outside of a cool  tree-hugging town called Brevard.

This trip was such a refreshment to us in many ways.

First our children were able to accompany us. The camp operates on parental volunteers in addition to their paid staff. Each middle schooler who attended camp also had a parent who came to work the kitchen snacks etc. While we were having morning and night meetings the parents were having their own worship and intercessory prayer meetings in the cafeteria. The parents did not room with their children. They stayed with other parents. I saw neat bondings happening as parents prayed with others parents for their children. The benefit for us was that their were many adults who took turns caring for my children while I led worship and attended practices with Shannon. 2nd     we stayed in a three story house. The bottom floor housed female campers and counselors. The middle floor housed the camp director and his wife     along with two children (the same ages as mine!) and another married couple. We stayed on the top floor which had two bedrooms and a full bath.  These couples became dear friends. We stayed up many evenings eating snacks processing the day and enjoying rich fellowship with like minded people.

A golf cart was the primary means of transportation for staff. We got up every morning dressed and rode the cart to breakfast…and lunch…and dinner… and at snack time. ( I got really spoiled!) While we were at meetings the sitters & my kids (and their friends) would ride the carts all over camp to explore. (I have a stinking suspicion they spent most of that time throwing rocks – which brings me to the next highlight.

Rock Throwing became a favorite pastime for my boys. They searched for the perfect rock then promptly threw it in the river making different sized splashes. I think they could have done this for hours.

Everywhere you walked at camp you could hear the rush of the falls. It was like having a sound machine on all the time- except this was the real thing. The mere sounds of the falls reminded me of God’s love constantly- the roaring rush and neverending waters. The afternoons were spent in the river. The camp schedule went like this: river time snacks then nap time before dinner. We pretty much followed this schedule. The counselors split up and went to different river locations different times of the day. The counselors were very trained on safety and did a good job of life guarding the area. Shannon rode the rooster tail with both boys. The rooster tail is like a water ride the slope of the rock resembles a tail that has a high jump at one point. The boys were in heaven!

If you were not riding the rooster tail you could go to the Chalet area which is the waterfall in the front picture. There were several small rocks to slide and lots of areas to wade and swim. Shannon took the boys under falls and even climbed up the rock side of one waterfall with Kenimer. 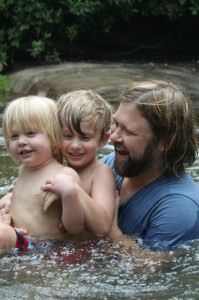 Tucker’s not so sure. 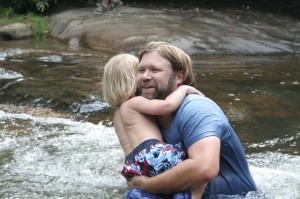 I Think we look like the Tarzan family in this one! 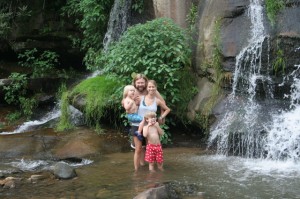 I really can’t describe how special this week was for us. The counselors were some of the most outstanding high school and college kids we have ever met. They truly ministered to us in many ways. Singing original songs and having the kids ask to sing them really increased my confidence that these songs come from Jesus and he has a plan for them. The only job we have is to be good stewards of the songs he gives us.

We left Camp Saturday night after some tears and heartfelt conversations. We headed down to Atlanta and woke up early Sunday morning in order to get to GRACE FELLOWSHIP by 7 a.m. We were leading for all three services. Although we were energy depleted at the end of Sunday- I can’t think of any better way to spend eight days! A friend of mine stayed with the boys Sunday morning for the first two services and we brought to the afternoon service. She reported that Kenimer cried at breakfast saying that we had to go to the white building to eat breakfast (I think he was a little spoiled also). He was asleep when we got into ATL and was quite traumatized that we were not at Camp! The Lewis Family was completely rejuvenated and encouraged by our eight day adventure!

Babe parties. The last two weekends have involved two of them. One was a traditional Saturday women’s shower and the other happened to be a couples shower.

It seems that there is a trend… when I get a baby party invite…there is usually another. The same occurrence with weddings. One wedding invite and soon another and the same with showers. This confirms my theory that clusters of babies are born around the same time. AND. There really might be something in the water…ditto for marriages as well. I fully heart the institution of marriage and the practice of baby making.

Though it does take some time and effort. Lately I have been too busy and thus recipients of my baby shower and wedding attending have gotten store bought gifts. I feel that I have done someone an injustice when I buy a store-bought gift. I don’t know why…but if I purchase a gift I really want it to be unique. You guessed: It is nearly impossible for me to buy from a registry. With the ever increasing absence of “extra money” I have resorted to making gifts again.

For the baby showers I make hospital signs. They are signs that record the date time weight and height of the baby’s birth and can be placed on the wee one’s nursery door later. The first one I made was for my baby (two and a half year ago)! It was made from a small slate chalkboard. I have made them with wood cut outs of animals or whatever the room theme. These two are a bit simpler as the nurseries were not specific themes- just colors.

This one is for Cassie May. The font is Jane Austen. 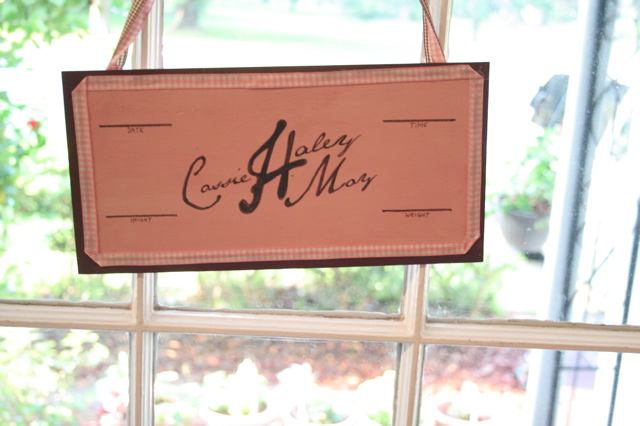 This one is for Cannon Van… which is such a smart name. The font is traveling Typewriter. 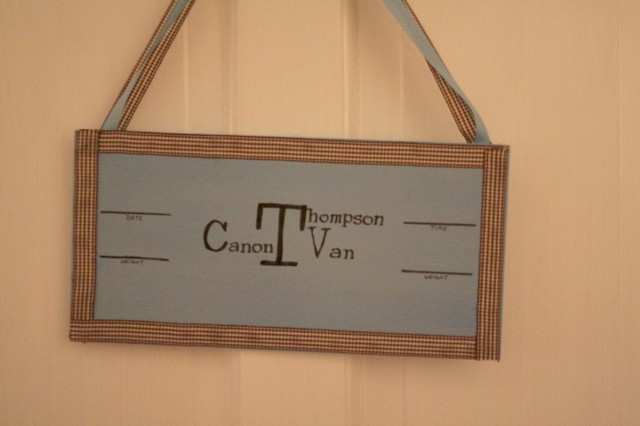 They were made from two thin pieces of wood ribbon and acrylic paint…all items in my art boxes in the shed. Never pass up an opportunity to create or “make something” out of your resources. Your mood will thank you later. I promise. It does a body good. Kinda like milk.